Smart Contracts In Blockchain Technology: What They Are & Why They Matter 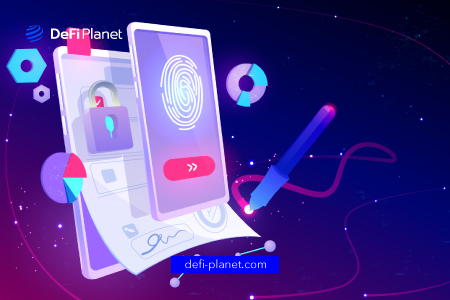 Smart contracts may be used as a form of contract to replace traditional contracts. For instance, a smart contract can be used by multiple individuals to reach a consensus or agreement. In this case, the contract terms are encoded and, once deployed, can’t be altered.

Some enthusiasts have posited that smart contracts may replace traditional contracts, but will that be the case?

What are Smart Contracts?

Smart contracts are automated multi-party agreements. They are designed to address the shortcomings of traditional contracts, which can be altered. In a traditional contract, the entire process is overseen by a lawyer who drafts the agreement and remains present during negotiation and signing. They may also retain the final agreement in their custody.

There are risks associated with this method, such as a single point of failure, which could be caused by one party corrupting the lawyer or the misplacement of the signed contract by the lawyer.

The traditional contract may also be rendered ineffective if one party breaches the terms of the contract. This could, in turn, degenerate into lengthy legal battles.

Smart contracts address these issues. For starters, it is immutable, which means that once it is added to the blockchain, no one can change the terms of the agreement.

Secondly, it is fully automated. It immediately automates itself once the terms of the agreement are met. For example, if a user purchases a parametric insurance package from a decentralized insurance company, the smart contract pays the user immediately if the agreement’s conditions are met.

What Are The Use Cases Of Smart Contracts?

Smart contracts have numerous applications. As long as an agreement must be reached, a smart contract can be used to automatically enforce its terms. This is one of the reasons why a smart contract is usually used when establishing a DAO.

What Are the Benefits of Smart Contracts?

Smart contracts are preferred for various reasons, some of which will be discussed below.

Smart contracts are automated and self-executing, which means they do not require anyone’s permission to function properly.

Smart contracts are transparent because they are stored on the blockchain, which means anyone can view the terms of the agreement.

This reduces the chances of individuals attempting to change the terms of the contract.

Once deployed in the chain, smart contracts are immutable, which means they cannot be altered.

This type of technology is generally secure and cannot be altered unless the blockchain encounters a problem.

Developers can customize smart contracts to serve a variety of purposes, ranging from serving as a marriage contract to being the base layer of a DAO.

What Are The Drawbacks Of Smart Contracts?

Though they are innovative solutions, smart contracts still possess some limitations. Some of which will be described below.

What Are Examples of Blockchains With Smart Contracts?

Smart contracts have evolved into one of the most critical components of many blockchains.

Developers can use this feature to create decentralized apps, reach agreements, form a Decentralized Autonomous Organization (DAO), and much more.

Previously, the validity of smart contracts was limited to only one chain.

With the help of the Ethereum Virtual Machine, smart contracts are now compatible with multiple chains (EVM).

Typically, this enables developers to migrate their smart contracts from one chain to another, particularly Ethereum and Ethereum-compatible chains. Below are some examples of blockchains with smart contract functionalities.

Charles Hoskinson, the co-founder of Ethereum, created the Cardano blockchain.

The CSL layer is responsible for peer-to-peer transactions such as token transfers between ecosystem users. It serves as a balance ledger.

“The Cardano Foundation is in charge of the Cardano blockchain’s development. Cardano was created by IOHK, as was Ouroboros, the proof-of-stake algorithm that Cardano employs to run its network.

EMURGO facilitates the adoption of Cardano technology by corporations and larger organizations.”

In 2017, Anatoly Yakovenko partnered with Greg Fitzgerald and Eric Williams to launch the Solana blockchain officially. Solana is a blockchain that was created to address scalability issues that its predecessor, Ethereum, had been unable to solve for some time.

It has been dubbed “the Ethereum killer” because some cryptocurrency enthusiasts believe that this chain’s transaction or gas fees are reasonable, implying that this could cause Ethereum to go out of business if it does not scale.

Polkadot was created by Gavin Wood. It is a smart contract blockchain that was designed to solve the blockchain trilemma of decentralization, speed, and security. Polkadot, unlike Ethereum, is structured as a web of autonomous blockchains linked by a relay chain. It is essentially a protocol that connects blockchains, allowing the transfer of currency and data across previously incompatible networks (Bitcoin and Ethereum, for example).

Polkadot has parachains, which are standalone blockchains. As custom chains, they are meant to serve some purposes. They actively participate in validating transactions and ensuring their accuracy by utilizing computing resources.

These chains can develop a unique governance mechanism while taking advantage of Polkadot’s shared security feature. Before a project can run a parachain, it has to rent a spot on the Relay Chain through an auction process.

Avalanche was developed by researchers at Cornell University. The research team was headed by a professor of Computer Science at the university, Emin Gun Sirer, while the other members were doctoral students, Maofan “Ted” Yin and Kevin Sekniqi.

Developers and enterprises can use Avalanche to create smart contracts to guide their operations. According to Avalanche, it has one of the fastest smart contract features in the ecosystem. Creating and deploying smart contracts is more cost-effective compared to Ethereum. Aside from the benefits already mentioned, the lack of congestion in Avalanche means that transactions are fast.

It has three chains, which are P-Chain, X-Chain, and C-Chain.

The X-Chain is an easy-to-use programmable network. C-Chain allows developers to port their decentralized apps from Ethereum to this network. The P-Chain is designed to oversee the operations of the Avalanche network.