An Overview of Aave Protocol: Security and Features 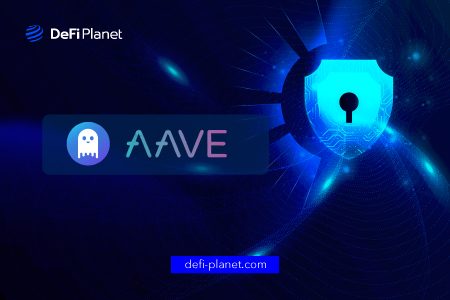 Decentralized Finance has been growing tremendously recently and is currently being compared with traditional finance. DeFi protocols focus on different areas. Some are designed to be decentralized insurance platforms, such as Nexus Mutual. DeFi insurance involves obtaining insurance coverage against losses in the decentralized finance space for oneself or a DeFi protocol.

It may come in the form of a DEX, a DeFi platform that allows users to swap tokens without the presence of a centralized authority, such as UniSwap and Pancakeswap.

DeFi protocols may also come in the form of GameFi platforms. This ecosystem is focused on incorporating financial architecture into gaming.

This article analyzes a notable player in the decentralized lending game, Aave Protocol, and its features.

Aave didn’t begin at its current stage; its origin can be traced back to 2017. Some developers led by Stani Kulechov decided to create a lending platform called ETHLend. In 2017, these developers organized an Initial Coin Offering (ICO) for the project.

ETHLend was intended to be a platform that connected lenders and borrowers by allowing users to post loan offers and requests. Those with extra funds who wanted to lend them out posted offers, while those in need of loans posted requests.

ETHLend drew users’ attention due to its novelty, but usage declined following the 2018 bear market. In 2020, the team decided to rebrand ETHLend as Save and modify its operations, including adding a smart contract to its architecture.

Aave ticks the boxes of a decentralized lending protocol, offering crypto lending services to users without the involvement of any centralized authority. In this DeFi protocol, users who offer their idle funds for lending are rewarded with interest, while those who borrow have to pay interest.

Aave is an open-source DeFi protocol based on the Ethereum blockchain, and since it is a decentralized lending platform, it utilizes smart contracts to control the ecosystem. When users want to lend their idle tokens, the smart contract oversees the transaction, and the same happens for borrowers.

AAVE is the native token of this ecosystem, and it grants the holders the right to participate in the governance process. They can submit proposals and vote on them.

How Does Aave Work?

Decentralized lending platforms come in different forms. Some may offer flash loans, and others may be over-collateralized loans. In flash loans, there is an absence of collateral in the transaction. The lending protocol does not require the borrower to submit collateral before accessing the loan. Usually, the lender takes out the loan, uses it for a purpose, and pays it back in the same transaction.

Everything is done in one transaction. In the event that the borrower is unable to repay the loan, the transaction is reversed. The Aave Protocol is an overcollateralized lending platform, meaning that borrowers are expected to offer collateral with more value than the loan they want.

Aave is an algorithmic money market, which means that the loans are accessed from liquidity pools instead of peer-to-peer transactions. The borrower is expected to deposit a collateral amount greater than the loan they wish to obtain. In this case, the lender offers their idle tokens to the pool for a while, hoping to earn interest in return.

One element that borrowers have to consider when depositing collateral is liquidation. The crypto market is highly volatile, meaning that the value of cryptocurrencies falls and rises sharply.

This DeFi protocol takes it up a notch by creating pools for real-world assets such as cargo and real estate, allowing the tokenization of these assets.

What is Aave’s Security Architecture?

Aave Protocol uses different systems to secure its operations, and one of them is done via the “incentivization of AAVE holders to lock tokens into a Smart Contract-based component called the Safety Module (SM).”

If a Shortfall Event occurs in the Aave ecosystem, the smart contract uses the locked AAVE tokens to mitigate the effects of the event.

“Shortfall Event occurs when there is a deficit. The interpretation for the occurrence of a Shortfall Event is subject to the Protocol Governance vote.”

When a Shortfall Event occurs, a portion of the locked AAVE is auctioned on the open market to reduce the effects of the deficit. To ensure that the market is not flooded with AAVE, which may reduce the value of this token, a “backstop mechanism” is built into Aave Protocol.

It is important to note that those who lock their AAVE agree that a Shortfall Event may occur, leading to the locked tokens being sold. Aave offers incentives to those that lock their AAVE tokens.

Aave’s safety module is divided into multiple parts, which will be described below.

In this part, holders of AAVE tokens can lock them to protect the DeFi platform. By staking the token, the user knows that the staked tokens can be sold during a Shortfall Event.

In this module, the staked assets are auctioned when a Shortfall Event occurs. Immediately after this event happens, this module is triggered.

The backstop module is the component that “maintains an ongoing incentivized bid for minted or slashed AAVE to recapitalize the protocol in case of Shortfall Event.”

This component is meant to oversee fees receiving, management, and distribution in Aave markets.

To ensure that it has access to real-time data, the Aave Protocol Oracle System uses Chainlink oracles. This allows the smart contract to know when a Shortfall Event has occurred.

What are common shortfall events?

The common shortfall events are linked to “unexpected loss of funds” which may arise from the following.

Aave Protocol is a decentralized ecosystem that is controlled by smart contracts. These smart contracts are pieces of code, and there is the risk that a bug could affect them.

When liquidation occurs, liquidators have to swing in quickly. In the case that this does not happen, there could be a loss of funds, which leads to a Shortfall Event.

Sometimes, the market may have a low level of liquidity, which may degenerate into a Shortfall Event.

An Overview of The Optimism Network

Should New Gaming Companies Do An Initial Game Offering?