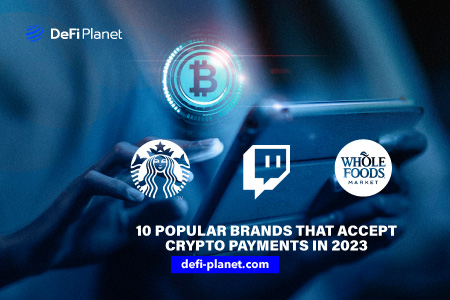 As the benefits of using digital currency for transactions become more widely understood, the popularity of cryptocurrency is on the rise. The cryptocurrency sector has evolved from a niche industry for tech-savvy individuals to a mainstream choice for investments and payments.

Cryptocurrencies provide a safe, decentralized, and efficient means of conducting financial transactions; therefore, their acceptance by major corporations signifies a paradigm shift in how people think about money.

The growing number of prominent organizations accepting cryptocurrencies as a valid form of payment is one of the key factors driving their mainstream adoption.

From retail giants to popular online platforms, a wide range of companies are now embracing the use of cryptocurrencies to streamline their payment processes. This trend is expected to continue as cryptocurrencies become more mainstream and widely adopted.

It’s worth noting that the adoption of digital currency by these renowned brands not only helps to promote the use of cryptocurrencies but also further legitimizes them as a viable means of conducting transactions.

Additionally, the use of digital currencies can also reduce transaction costs and enable lightning-fast payments, making them a valuable addition to the payment ecosystem.

This article highlights some of the top brands making significant advancements in the crypto sector and currently accepting crypto payments for products and services.

Some top brands that accept cryptocurrency payments for products and services are listed below.

In 2014, Microsoft made history by becoming one of the first major corporations to embrace the use of cryptocurrencies. The company partnered with Bitpay to allow consumers in the United States to purchase software and games for the Windows Phone, Xbox, and Windows operating systems using Bitcoin as a payment option.

However, in the years that followed, Microsoft temporarily removed the option to pay with Bitcoin before reinstating it in January 2021 for its Microsoft Store.

“For us, this is about giving people options and helping them do more on their devices and in the cloud. The use of digital currencies such as bitcoin, while not yet mainstream, is growing beyond the early enthusiasts. We expect this growth to continue and allowing people to use bitcoin to purchase our products and services now allows us to be at the front edge of that trend,” said Microsoft Universal Store vice president Eric Lockard while explaining the reason behind the move.

Despite this, it should be noted that cryptocurrency payments are no longer officially accepted on the Xbox online store.

Microsoft President Brad Smith has stated that the corporation is open to accepting Bitcoin as a payment option but that the company intends to proceed with caution and avoid making any significant moves toward issuing cryptocurrencies.

Overstock, a well-known American online retailer, became one of the first major brands to accept Bitcoin as a form of payment. Overstock entered a strategic partnership with Coinbase, allowing customers to easily purchase a wide range of products, including furniture, home decor, and electronics, using bitcoin.

Not only did this move make shopping on Overstock’s website more convenient for customers, but it also positioned the company as a leader in the rapidly evolving world of e-commerce.

This forward-thinking approach not only benefits customers but also allows Overstock to stay ahead of the competition in the ever-changing e-commerce landscape. By embracing the use of cryptocurrency, Overstock is demonstrating a commitment to innovation and meeting the needs of its tech-savvy customer base.

With RydePay, users can store and use Bitcoin via the built-in digital wallet and convert Bitcoin payments into Ryde tokens. These tokens can then be used to book new trips or request top-ups on the app. The conversion of Bitcoin to Ryde tokens is based on the current market rate at the time of the transaction, and users will not incur any additional fees for paying with Bitcoin.

In addition, Ryde’s use of RydeCoin, which is pegged to the Singapore Dollar, allows for a more stable and transparent currency for its users. RydePay’s integration of cryptocurrency payment options into its platform provides users a new level of convenience, making it possible to pay for rides with Bitcoin and other cryptocurrencies with zero transaction costs.

Etsy, the popular online marketplace, may not have a built-in framework for accepting Bitcoin as payment on its website, but that doesn’t mean you can’t use cryptocurrency to make purchases on the platform. Independent merchants who sell on Etsy have the option to accept Bitcoin and other cryptocurrencies in their stores, should they choose to do so.

As a buyer, you have two basic options for using cryptocurrency to make purchases on Etsy. The first is to pay merchants directly with your cryptocurrency wallet. In order to do this, the seller must include an “other” payment method option at checkout. If you select this option, you can message the seller with your payment preferences — Bitcoin, in this case. The seller will then provide you with a Bitcoin address to finalize the transaction.

If you’re interested in using Bitcoin to make purchases on Etsy, be sure to check out the Etsy Community forum. The forum has a specific page dedicated to Bitcoin, with tips and advice on how merchants can advertise that they accept Bitcoin and how to make the buying process smooth and easy for buyers.

Shopify is a leading e-commerce platform that enables merchants to establish their online stores and sell products, similar to the likes of Amazon, eBay, and other large online retailers.

In 2013, Shopify embraced the world of cryptocurrency by introducing Bitcoin as a payment option for its merchants, allowing them to accept Bitcoin from their customers.

Fast forward to 2020, Shopify took a step further in its support for digital currencies by partnering with CoinPayments, BitPay, and Coinbase Commerce. This collaboration introduced new and cutting-edge digital payment options for Shopify vendors, making it easier than ever for them to accept a wide range of digital currencies.

Furthermore, in 2022, Shopify enabled merchants to also accept cryptocurrency as a payment method through the integration of Crypto.com Pay. This feature allows vendors to tap into the growing market of crypto users and expand their reach to new customers. It also provides an additional layer of security and convenience for customers who prefer to pay with digital currencies.

Overall, Shopify’s commitment to digital currencies has opened up new opportunities for vendors to increase their revenue and stay ahead of the curve in the ever-evolving world of e-commerce.

Travala is a blockchain-based travel booking website that accepts a wide range of cryptocurrencies as a mode of payment.

Travala offers the most flexibility in cryptocurrency payment options in addition to accepting traditional credit and debit cards.

With access to over 2 million hotels, flights, and other travel options, Travala provides users with a seamless and convenient way to book their next vacation using digital currencies.

The online travel company accepts many cryptocurrency payments, including Cardano (ADA), Bitcoin, Ethereum (ETH), Dogecoin (DOGE), and more. It’s also partnered with Binance Pay and Crypto.com Pay so customers can pay for their hotel stays through the exchanges’ apps.

In addition, Travala has formed partnerships with Binance Pay and Crypto.com Pay, allowing customers to pay for their hotel stays directly through the exchange’s apps. This further enhances the convenience and security of the booking process.

Furthermore, Travala.com has its own cryptocurrency, AVA, which has seen significant growth in value since July 2022. This not only demonstrates the company’s commitment to the integration of blockchain technology but also presents a unique investment opportunity for users.

In summary, Travala is a game-changer in the travel industry, providing users with a secure and convenient way to book their next trip using a variety of cryptocurrency options. Its partnerships and own cryptocurrency, AVA, further solidify its position as a leader in the blockchain-based travel booking space.

AT&T is a major telecommunications corporation with its headquarters located in Texas, USA, and operates in several Latin American countries as well.

The company, which is the largest telecommunications company in the world, announced in May 2019 that it would begin accepting Bitcoin as a payment option for its customers.

In a groundbreaking move, AT&T partnered with BitPay to become the first mobile carrier to offer cryptocurrency payment options to its consumers.

While it does not accept cryptocurrencies directly, AT&T is the first major US cell carrier to allow consumers to pay in Bitcoin via a third-party service provider.

Customers who use the company’s online bill pay service or the myAT&T app can easily pay their bills with BitPay, a bitcoin payment processor. The customer pays in Bitcoin, and BitPay confirms the transaction and accepts the Bitcoin on the company’s behalf.

Gyft is an online gift card retailer that offers customers the convenience of purchasing gift cards using Bitcoin. With partnerships established with a variety of major brands such as Amazon, Target, and Starbucks, Gyft makes it easy for customers to shop at these popular stores using Bitcoin.

Not only does this provide customers with an alternative payment option, but it also allows for a seamless shopping experience.

In March 2021, Tesla CEO Elon Musk announced on Twitter that the company would begin accepting Bitcoin as payment for electric vehicles. Initially, the option to pay with Bitcoin was only available in the United States, but Musk indicated that the company was exploring ways to expand this payment method to other countries.

However, just two months later, in May, Musk announced that Tesla would no longer accept Bitcoin due to concerns about the environmental impact of cryptocurrency mining.

In January 2022, Musk made another surprise announcement when he stated that Tesla would begin accepting Dogecoin (DOGE) as a form of payment from customers.

However, it’s important to note that customers cannot use Dogecoin to purchase electric vehicles and can only use it to purchase products or merchandise from the company’s online store.

In a major development, online payment giant PayPal announced in October 2020 that it would begin accepting cryptocurrency payments. This move marked a major milestone in the mainstream adoption of digital currencies.

PayPal partnered with Paxos Trust Company, a regulated financial institution that specializes in trading cryptocurrencies. This collaboration allows PayPal customers to use their wallets to purchase items from millions of merchants worldwide that accept crypto payments. Also, customers can store, buy and sell cryptocurrencies such as Bitcoin and Ethereum using their PayPal wallets.