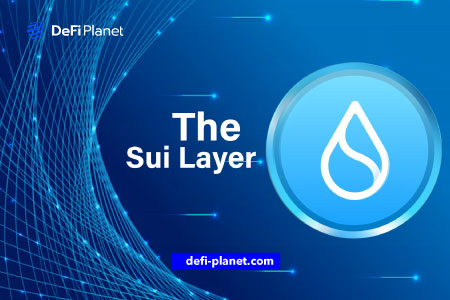 There is a proliferation of new L1 (layer 1) blockchain networks, making it difficult to tell which ones will last. This year, the Sui blockchain joined the growing number of programmable smart contract platforms. Sui seems promising because its blockchain has several features that set it apart from other blockchain networks.

This guide comprehensively examines the Sui blockchain, its key features, and its economic model.

Sui is a permissionless Layer 1 blockchain powered by the Proof-of-Stake (PoS) consensus mechanism. Its goal is to provide a wide range of next-generation decentralized applications (that are sensitive to latency) with instant settlement and high throughput.

Mysten Labs, an R&D firm established by ex-executives of Meta’s Novi Research and the primary architects of the Diem blockchain and the Move programming language, created the Sui blockchain. The company wants to change how Web3 works by making cutting-edge solutions that appeal to innovators from all walks of life.

Watch the video below to learn more about Sui:

The blockchain optimizes scalability and speed by keeping network connections open for longer, making each of the requests idempotent, and ensuring that transactions are completed without delay.

What users want to do in simple transactions is to send assets to a recipient. Rather than locking the entire blockchain, the platform simply locks the sender’s address. This means that when a simple transaction is being processed, the network doesn’t have to use the consensus mechanism.

In addition, the platform verifies each transaction independently, as opposed to collecting them into blocks like traditional cryptocurrencies. One significant advantage of this approach is the short time it takes to issue a certificate of finality after a transaction has been completed. Sui is fast and scalable because it establishes a connection between validators and requestors.

About Move: What is Move?

Those interested in getting into Sui blockchain development need to learn more about Move.

The Sui blockchain was built using the Move programming language, which is based on Rust. Move provides a bytecode language for creating adaptable transaction logic and smart contracts. It is platform-independent in the sense that it allows developers working on different blockchains to use the same libraries and tools and to form communities.

The primary goals of Move are to improve security and make the transition from Web2 to Web3 as smooth as possible. Re-entrancy vulnerabilities, poison tokens, and spoofed token approvals are all problems it can solve effectively.

The scalability of the blockchain is ensured by the fact that Move’s type system and data model are compatible with Sui’s parallel agreement. As of March 19, 2022, a single worker Sui validator working on an 8-core M1 MacBook Pro could process and also commit 120,000 token transfers per second without optimization.

The Unique Features of the Sui Blockchain

This section explores how Sui improves the user experience for Web3 solutions, takes a different approach to security, and makes the developer’s job easier.

A Unique Approach to Security

Unlike many other blockchain networks, Sui doesn’t place a premium on making robust asynchronous assumptions. Therefore, the chain can maintain its security properties even in unfavourable conditions such as network splits or DoS.

The Sui platform is built on Move’s blockchain-focused programming language to make things easier for developers. This means less repetitive coding and fewer mistakes with the most fundamental ideas for the developers.

By providing a set of tools based on the Sui software development kit (SDK), Sui claims it will help software developers create dApps and other Web3 projects with improved user experiences. Hence, the platform will make it easier to create:

This is the Sui blockchain’s native asset. Its total supply is capped at 10 billion tokens.

The four functions that the SUI token performs include the following:

In addition, the blockchain provides the Sui Wallet, a Google Chrome extension that can be used to store and manage Sui tokens. Users can use the wallet to keep track of their network assets and create new addresses.

Users can pay separate gas fees for execution and storage; a unique feature of Sui’s gas mechanism. In addition to making the user’s experience more pleasant, it helps them use the reference price as a stable basis for their transactions.

Sui has a storage fund to compensate future validators for the costs of storing previously stored data on-chain and redistributing stake rewards over time. Due to how expertly the platform was built, the storage fund will never run out and will always work as it should.

Validators and SUI delegates use the PoS consensus mechanism to choose users, engage them, and give incentives for honest behaviour.

During an epoch of predetermined duration, a set of validators with predetermined stakes assigned by SUI holders manage all operations. When SUI is delegated, tokens are locked for the duration of an epoch and can only be retrieved at the end of the epoch (when validators agree on all the transactions that happened during the epoch).

SUI token holders can participate in governance and decide on upgrades to the Sui blockchain protocol through on-chain voting.

Sui was developed by Mysten Labs, a company that builds the underlying infrastructure for Web3 projects. The company was founded by the developers of Novi/Diem at Meta (i.e., Adeniyi Abiodun, Evan Cheng, George Danezis, Sam Blackshear, and Kostas Kryptos).

Many of the concepts that make the Sui blockchain work, such as the Move programming language, the BFT consensus, and the Narwhal/Tusk mempool, were developed by these scientists and engineers at Meta.

Pakistan To Implement New Law for CBDC Launch by 2025