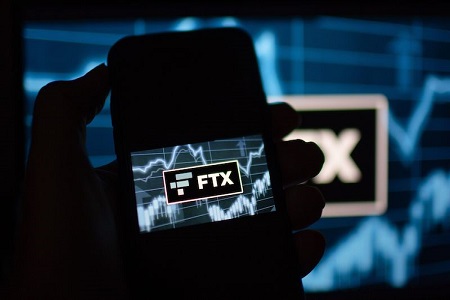 The FTX Cryptocurrency Derivatives Exchange logo on a digital device arranged in Riga, Latvia, Nov. 24, 2022. The implosion of Sam Bankman-Fried’s FTX empire dealt a harsh blow to the Bahamas’ ambitions to be a hub for the crypto industry, and it’s causing massive pain for locals who treated the now-bankrupt exchange like a bank. Photographer: Andrey Rudakov/Bloomberg

According to Reuters, the company lost up to $2 billion in customer funds after transferring them to Alameda Research, its sister company.

Authorities and law enforcement from multiple countries are investigating the company and its subsidiaries to determine whether any criminal activity occurred, further complicating matters.

This article delves into the events that led up to FTX’s shocking collapse and discusses the ramifications for the cryptocurrency industry and investors.

FTX is a cryptocurrency exchange headquartered in the Bahamas and managed from the United States.

The exchange facilitates the buying and selling of cryptocurrencies on its platform. Along with its competitor Binance, FTX processes the vast majority of cryptocurrency trades worldwide, making it a major player in the industry.

FTX and Binance are “international” exchange platforms. Each of them operates a US-regulated outlet at a distance, which adheres to the peripheral regulations imposed by the United States. However, most of the money that passes through their books is not constrained by regulations.

The Implosion Story: An Analysis of What Happened to FTX

The crash of FTX happened over ten days in November 2022. The crisis was sparked by a report published by CoinDesk on November 2 detailing a $5 billion position in FTX’s native token, FTT, held by Alameda Research, a trading firm run by Bankman-Fried.

According to the report, Alameda’s investment foundation had also invested in FTT, the token that its sister company, FTX, had developed. As a result, the cryptocurrency industry as a whole became concerned about the undisclosed solvency and leverage of Sam Bankman-Fried’s companies.

Binance Announces the Sale of 100% of Its FTT Tokens

Binance, the world’s largest cryptocurrency exchange, announced on November 6 that it would liquidate its entire holding of FTT tokens (23 million units) with a market value of approximately $529 million.

In light of the fallout from the Terra (LUNA) ecosystem’s collapse in May 2022, Changpeng Zhao (Binance CEO) stated, “The decision to liquidate the exchange’s FTT position was based on risk management.”

A day after the CoinDesk report was released, FTX started experiencing liquidity issues. Bankman-Fried tried to reassure FTX investors that the exchange’s assets were secure, but customers made panic withdrawals totaling $6 billion. Before approaching Binance, Bankman-Fried had sought funding from venture capital firms. Within two days, the value of FTT plummeted by 80%.

On November 8, Binance announced that it had signed a non-binding agreement to buy FTX’s non-U.S. business for an undisclosed amount.

The plan to bail out FTX was short-lived because Binance cancelled the deal a day after it was announced. The deal was cancelled due to issues with the mishandling of customer funds discovered during corporate due diligence.

On November 10, securities authorities in the Bahamas froze FTX Digital Markets’ assets after discovering that Bankman-Fried was looking for about $8 billion to save the exchange. The same day, the California Department of Financial Protection and Innovation launched an investigation into FTX.

On the day the liquidity crisis began, FTX’s non-U.S. exchange admitted on Twitter that it did not have the funds required to meet customer demands. This admission prompted an apology from Bankman-Fried. Bankman-Fried blamed “poor internal labeling” for FTX’s faulty calculations of leverage and liquidity. He stated that Alameda would cease trading on the same thread.

FTX Files for Chapter 11 Bankruptcy; Bankman-Fried Steps Down as CEO

Bankman-Fried resigned as CEO of FTX on November 11. John J. Ray III, the famed attorney who oversaw the bankruptcy proceedings of Enron Corporation, was chosen to take his place. On the same day, FTX filed for Chapter 11 bankruptcy protection and disclosed that about 130 of its subsidiaries were also involved.

According to its bankruptcy filings, FTX had assets and liabilities totaling between $10 billion and $50 billion.

Just hours after declaring bankruptcy, FTX said it had been the target of “unauthorized transactions” and would place its digital assets in “cold storage” to protect them. Experts from other companies believe that $477 million was stolen from FTX in the suspected hack.

On November 18, the Securities Commission of the Bahamas (SCB) seized FTX’s assets. The SCB stated that it had requested that Bankman-Fried transfer FTX’s cryptocurrency assets to the regulator’s wallet.

What Is the Fate of Investors’ Assets?

Investors who kept some or all of their cryptocurrency on FTX will not be paid until the cryptocurrency exchange has paid its legal fees and creditors.

However, users are not guaranteed payouts; they will receive a share only if money remains after the company has covered its expenses. Even so, depending on the platform’s financial situation, this isn’t always the case.

Although insurance can be a lifeline for those holding funds in a custodial account, FTX does not offer such safeguards for deposited funds. Crypto withdrawals and user activity have been temporarily halted while the company works to make its platform more secure.

What’s the Next Line of Action for FTX?

FTX must either raise billions of dollars to meet customer withdrawal requests or devise a method to halt withdrawals by assuring customers that their funds are secure, both of which are difficult to achieve.

According to Bloomberg, Bankman-Fried stated that the company needed $4 billion to remain in operation, leaving an $8 billion funding gap.

Furthermore, the unfolding events raised more profound concerns. The day before FTX agreed to sell to Binance, CEO Bankman-Fried tweeted that the exchange was “fine” and that it never traded with customers’ funds.

However, a venture capital firm called Sequoia Capital, which invested $150 million in FTX, warned investors in a note that the company was experiencing solvency problems and a liquidity crunch.

Sam Bankman-Fried resurfaced the day after the deal fell through to apologize. He posted a series of tweets in which he apologized for poor communication and admitted he had assumed the exchange would not face a liquidity crisis. He insisted, however, that the exchange was not insolvent.

What Impact Has the FTX Crash Had on the Cryptocurrency Market?

Also, the price of Ethereum (ETH) dropped by 15%, falling to over $1,090 per unit. According to CoinGecko, the value of Solana decreased by 42.5% after the deal was canceled, while the value of the FTX token decreased by 70.5%.

Despite the short-term disruptions caused by the FTX collapse, the FTX collapse will not have a long-term impact on the blockchain sector. The fact that the market is self-correcting confirms this.

How Investors Can Safely Store Their Cryptocurrencies

Following the FTX debacle, many traders are still debating whether self-custody is preferable to using an exchange’s wallet.

Several centralized cryptocurrency trading companies have recently declared bankruptcy, including Mt. Gox, Voyager, and Celsius. These developments have scared off many cryptocurrency investors.

Since the exchange controls access to the wallets, the users whose funds are held solely on FTX bear the brunt of the loss.

Users who want to directly manage their crypto assets can choose from a variety of alternative storage options.

Although DeFi wallets are similar to custodial services, the companies themselves do not have access to users’ private keys. In addition to the custodial crypto wallet provided by an exchange, users can also open non-custodial wallets. However, doing so is not recommended if users want to maintain complete control over their assets’ private keys.

Strike Partners With Bitnob To Launch Fast Payments in Africa