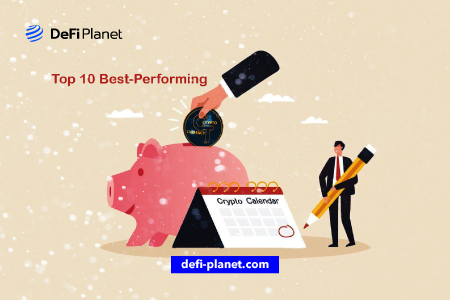 The cryptocurrency market has experienced significant growth and evolution since its inception in 2009 with the creation of Bitcoin. This digital asset class has gained widespread adoption and popularity in the past decade, with thousands of different cryptocurrencies in circulation.

However, the initial enthusiasm of early 2022 was followed by a “crypto winter,” leading to a significant drop in the values of leading cryptocurrencies.

Some cryptocurrencies have stood out among the rest in terms of trading demand during the early-year boom and the subsequent downturn, with total market capitalization reaching new all-time highs. While Bitcoin, the first and most popular cryptocurrency, still dominates the market, other coins such as Dogecoin (DOGE), BNB (formerly Binance Coin), and Ethereum (ETH) have also garnered significant attention.

This article reviews the top ten cryptocurrencies that have performed the best in 2022.

Top 10 Cryptocurrencies with the Best Performance in 2022

Bitcoin (BTC) is a decentralized digital currency that uses encryption for security and is not controlled by any government or financial institution. It was created in 2009 by an unidentified person or group using the pseudonym Satoshi Nakamoto. Bitcoin is generally considered the first and most popular cryptocurrency.

Since its inception in 2009, Bitcoin has made significant progress in terms of acceptance and legitimacy. Initially, it was mostly used by tech-savvy individuals and was often associated with illegal activity due to its anonymity.

However, as time has passed, more and more reputable companies have begun accepting Bitcoin as a form of payment, and it has gained widespread acceptance.

Ethereum (ETH) is a decentralized and open-source blockchain technology that enables the creation of smart contracts and decentralized applications (dApps). It was developed by Vitalik Buterin in 2015 and is currently the second-largest cryptocurrency by market value.

Since its launch in 2015, Ethereum has gained significant attention and investment from the industry, increasing its value and popularity.

The release of Ethereum 2.0, also known as “Eth2,” in 2022 introduced a new Proof-of-Stake (PoS) consensus method and sharding, which allows the network to scale more efficiently and handle more transactions per second. Its value has seen significant growth in the past year and is expected to continue to rise in the future.

Tether (USDT) is a stablecoin that aims to provide traders and investors with a reliable digital asset. Its value is tied to a real-world asset, in this case, the US dollar. Tether aims to maintain a constant value where one USDT is roughly equivalent to one US dollar. This makes it a popular choice among traders seeking to avoid the volatility of other cryptocurrencies.

Since its introduction in 2014, Tether has become one of the most well-known stablecoins in the cryptocurrency market, with a market capitalization of over $50 billion as of August 2022.

One of the primary characteristics of Tether is its stability. Each Tether token is backed by an equivalent fiat currency held in reserve, and its value is pegged to that of a fiat currency such as the US dollar. This makes Tether’s value relatively stable compared to other cryptocurrencies, which can be subject to significant fluctuations in value.

For example, the value of a cryptocurrency may change by 10-20% in a single day due to the high volatility of the crypto market. On the other hand, USDT is shielded from these changes, making it a more reliable store of value.

USDC is a stablecoin similar to Tether, backed by the US dollar and issued by reputable financial institutions. It was created in 2018 by Circle and Coinbase as a more open and trustworthy alternative to Tether and other stablecoins.

In the past four years, USDC has gained popularity among individuals and businesses who want to make fast and secure transactions using the stability of the US dollar.

It is expected that USDC will be widely used by businesses and individuals in 2023. Currently, a wide range of businesses, including restaurants, online retailers, and even some physical stores, accept USDC as a form of payment.

Additionally, USDC is accepted as a payment method on various platforms, such as gaming apps and freelance websites. The market capitalization of USDC is currently $44.34 billion.

Binance introduced BNB in 2017 as a utility token, but it has since evolved into a distinct, high-value cryptocurrency that is traded on various exchanges worldwide.

Since 2022 began, BNB has seen a rise in both value and popularity. It has consistently ranked among the top 20 cryptocurrencies by market value, and its price has steadily increased over the past year.

Ripple is a real-time gross settlement system, currency exchange, and remittance network created by Ripple Labs Inc., a US-based technology company. It was designed to be used as a fast and cost-effective alternative to traditional banking systems for international payments.

Since its launch in 2012, XRP has made a significant impact. At its peak, it was worth more than $3 per coin, making it one of the most valuable cryptocurrencies in the world.

XRP has had its ups and downs in the past year, as is common with most cryptocurrencies due to market volatility. However, it has managed to remain competitive and maintain a relatively stable value.

Binance USD (BUSD), is a stablecoin created by the popular cryptocurrency exchange, Binance in partnership with Paxos Trust Company. It aims to provide a more dependable and secure alternative to other stablecoins.

Since its launch in 2019, BUSD has gained significant popularity, with many individuals using it to store and make payments with digital assets and earn interest. BUSD remains a popular choice in 2022 for those seeking a stable and reliable way to buy and use digital assets.

In 2013, Dogecoin (DOGE) was created as a joke inspired by the popular “Doge” meme featuring a Shiba Inu dog and Comic Sans text. Although it was initially just a joke, Dogecoin has gained popularity and is now used as a digital currency for online transactions. Dogecoin employs the same technology as Bitcoin, but Dogecoin has a higher maximum coin supply and a faster block time.

Despite its humorous beginnings, Dogecoin has gained a reputation as a legitimate cryptocurrency and is now accepted by some businesses as a valid form of payment.

The “meme stock” craze on social media platforms caused Dogecoin’s price to rise significantly in 2022, with several people claiming to have made significant profits from their Dogecoin investments.

This means that in order to validate and add Cardano network transactions to the blockchain, users hold ADA tokens in their wallets and engage in “staking.”

ADA has gained attention in recent years due to its emphasis on security and scalability, as well as its unique consensus mechanism. It has also been widely adopted by businesses and organizations, with popular cryptocurrency exchanges such as Coinbase and Binance offering ADA trading on their platforms.

$MATIC is the native token of Polygon, an Ethereum L2 scaling solution. The native tokens of Polygon, known as MATIC, are Ethereum-based ERC-20 tokens. The tokens are utilized as a settlement currency inside the Polygon ecosystem and for payment services on the platform. Transaction fees on Polygon side chains are also paid using MATIC tokens.

Holders of MATIC tokens have special access to the protocol and can use their tokens to vote on Polygon Improvement Proposals (PIPs) in the network’s governance.

Top 10 Biggest Events in the Cryptocurrency World in 2022

Discover the Most Exciting Metaverse Projects of 2022: Your Ultimate Guide to the Top Picks