An Overview of Common NFT Scams 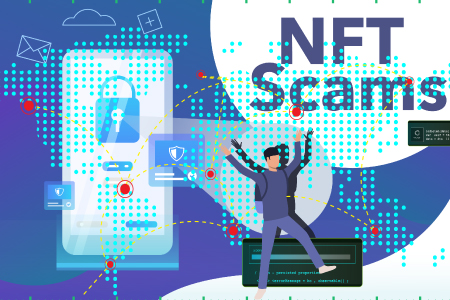 NFTs are becoming quite common in different areas. Musicians are releasing their albums as NFTs. Sports brands are exploring this type of unique token while launching collectibles. Artists are commissioning different art forms from illustration, painting to sculpture as NFTs. Some projects focus on offering underlying services to those that purchase their unique set of tokens.

The use cases of NFTs have continued to increase daily. DeFi protocols are experimenting with offering varying features for holders of valuable Non-Fungible Tokens such as using them as collateral for loans and even hosting Initial NFT Offering features.

With the level of value that some NFTs possess, it has made them a target of hackers and scammers. Different tricks are being used regularly to fleece people of their NFTs or to illegally make money off others’ creativity.

Scam Tricks In The NFT Space

The blockchain ecosystem has gone from witnessing attacks on only decentralized finance protocols to hacks on NFT-related platforms. Below are some tricks used by scammers to illegally gain access to money in the NFT space.

Minting an NFT is like a walk in the park, as numerous platforms allow people to create these unique tokens on Ethereum and outside the network.

Artists have complained that their creative output was turned into NFTs by random people without their permission. Paintings have been copied and minted as NFTs then sold to unsuspecting buyers without the artist knowing. Complaints litter Twitter concerning this occurrence. Some artists have sent emails to the different NFT Marketplaces that host their stolen artworks, telling them to take down the plagiarized art.

Devin Elle Kurtz, a visual development artist, and illustrator is one of those that suffered this fate, and she detailed it in a tweet.

“I searched my name to make sure my art hadn’t been stolen and turned into NFTs, and sure thing, an obscure old piece from my DeviantArt is randomly on the front page of the marble cards NFT website? How is this allowed.”

With the millions of dollars in sales that some NFT arts have raked in, people are enamored with this concept. Counterfeiters seek art pieces that they feel would attract attention and sell quickly once minted, then convert them into NFTs without the express permission of the artist. Devin Elle Kurtz is one of the many artists that have complained about this trend.

Another core aspect of this ecosystem is NFT projects. These types of projects are created to achieve different purposes. They have significant issues that they want to solve and possess exclusive offers that are open to only holders of the native NFT. For instance, holding the price Bored Ape Yacht Club NFT opens the person up to exclusive activities. In the past, events have been held that attracted only BAYC NFT holders, which includes celebrities and public figures.

Being a member of the VeeFriends NFT project offers the holder access to an exclusive NFT convention called VeeCon.

In another example, members of the Flyfish club have access to an NFT members-only private dining club.

Some NFT projects are designed for social causes of different levels. For instance, the Women Rise NFT project intends to encourage more women to become interested in the realm of Non-Fungible Tokens.

People are interested in becoming a part of these projects because of the utilities they provide. Sometimes, they end up falling for fake NFT platforms. With the popularity of the Bored Ape Yacht Club NFT project, many platforms have emerged, claiming to be the next big thing. This trend reminds people of the ICO era of 2016/2017, where crypto startups were set up en masse, to fleece people of their money via ICOs. Ponzi schemes and outright scams were set up for this purpose. People were interested in participating in these scam projects because they felt it was like Bitcoin, but they lost their funds to these scammers.

The proliferation of NFT projects resembles the ICO era, as many platforms are being set up, and once the minting period ends, they disappear into thin air. The fear-of-missing-out (FOMO) has pushed people to join every project they see. The liquidity of an NFT Project and its native set of unique tokens depend on the community and the number of people interested in buying them. At the moment, the market is not quite liquid, especially if the Project’s founding team jumps ship once they sell their NFTs.

Sometimes, when an NFT enthusiast searches for an NFT marketplace on Google, they see ads claiming to link directly to the marketplace. By clicking on the ads, they may be redirected to a scam NFT store. This type of storefront is designed to fleece users of their NFTs and cryptocurrencies. When searching for an NFT Marketplace, it is important to avoid the Google Ads that display at the beginning of the search and head straight to the main search result. Usually, the marketplace’s URL is among the first two websites that display on the search result, and not the Ads.

Popular NFT Marketplaces are on social media, especially on Twitter. These accounts are designed to cater to the needs of users. Typically, they have a blue tick in front of the account, showing it has been verified by Twitter.

Creating accounts on social media, especially Twitter is quite easy. All that is needed is an email address or a phone number. People can change the username of their Twitter accounts anyhow they like, making it easy for scammers to claim to be genuine accounts of an NFT project.

Scammers clone the name of these platforms on Twitter and host giveaways. Usually, these giveaways come with tasks that put one’s cryptocurrencies and NFTs at risk. They may ask people to connect their wallets to a phishing website. The task may involve sending cryptocurrencies to a wallet address to win a unique NFT. Unsuspecting victims may fall for this because they feel it is from a reputable brand or individual.

With the concept of grinding to join a whitelist, people unwittingly attract others to join a scam project. The project may claim that they are offering free NFT giveaways to people, then send a malicious link. Sometimes, it may involve a random account sending a message to people, claiming that they have won free NFTs. To redeem the NFTs, they are told to connect their wallet to a phishing website and input their seed phrases. Once this is done, they lose the NFTs their wallet address holds.