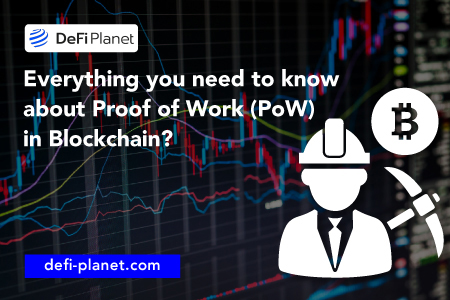 Adam Back went on to develop the concept by creating the Hashcash mechanism. This mechanism was designed to reduce the spread of junk mail by making people do some tasks before they could send out emails to others. By doing the task, people would be discouraged from sending junk mail to others.

The founder of Bitcoin built on the concept to create the Proof of Work blockchain that needed miners to solve complex mathematical puzzles before they can validate transactions and build blocks. The cryptographic function is designed in such a way that the mathematical puzzles become more complex daily to increase the time and power expended in solving them.

Proof of Work blockchain is the first generation of blockchain in existence, and it is used by the likes of Bitcoin, Ethereum, and Litecoin, though Ethereum is currently working on porting from PoW chain to Proof of Stake network.

Proof of Stake, on the other hand, is a newer concept compared to its counterpart. It was designed to solve the issues noticed in Proof of Stake. A typical PoW chain is not as scalable as one would expect and many PoS solutions like Cardano are trying to solve this issue. The fees on a PoW chain like Ethereum are outrageous. Algorand uses the pure proof-of-stake (PPoS) protocol built on Byzantine consensus.

Before transactions are validated and new coins are mined in a PoW chain, it is expected that a massive amount of energy is consumed by miners, which has increased the calls by environmentalists to curb the large energy consumption. Proof of Stake networks, on the other hand, use lower energy because there is an absence of a complex mathematical puzzle to solve. Validators in this network are chosen to verify transactions based on different criteria, which may be different from network to network. A general concept is that those validators with a larger pool of tokens have a higher opportunity of being chosen compared to others. To secure the network, community members stake their tokens with the validators and get rewards in return. They can decide to choose whatever validator they want. As a result of this staking concept in PoS networks, there is the issue of illiquidity because once a token is staked, it may not be used until the end of the staking period. The likes of StaFi are solving this issue with its rToken innovation.

How do PoW protocols work?

Every blockchain has a mechanism for validating transactions, and it may vary from its counterparts. In a PoW chain, miners are given the power to create new blocks and validate transactions. To choose the miner that will carry out this task, a complex mathematical puzzle is set and the first to solve it can verify the transactions. Solving this mathematical puzzle needs intense energy, and that is why the process of mining is energy-consuming.

Once a transaction is verified and added to the blockchain by the miner, it becomes immutable, meaning that it can’t be altered. The miners are rewarded for their service.

PoW is highly secure and resistant to 51% and Sybil attacks. This occurs because an attacker has to spend a lot to gain control of 51% of the computational structure of the blockchain, which is an outrageous activity.

Why is PoW needed for blockchain?

Proof of Work is highly important because it incorporates security, trust, and transparency into the operations of a blockchain.

This consensus mechanism prevents bad actors from wreaking havoc in the network because participants like miners are expected to invest a lot of energy and money before they can verify transactions. This reduces the chances of them trying to manipulate the system or lying about a transaction.

PoW ensures that the blockchain is updated accurately and the data stored remains immutable.

With this consensus mechanism, it is easy for miners to easily gain access or leave without disrupting the operations of the network.

Is blockchain without PoW secure?

PoW is not the only consensus mechanism out there. Every blockchain, as earlier mentioned, has its mechanism of running and securing the system. For instance, Nano uses the Open Representative Voting Mechanism to secure its system.

According to Nano’s documentation,

“In order to protect against double-spending and Sybil attacks, Nano uses a unique consensus mechanism called Open Representative Voting (ORV). In ORV, user-selected representative nodes vote on each transaction, and every node (representative or not) independently cements each transaction after seeing enough representative votes to achieve quorum. Since Nano transactions are processed individually and asynchronously, deterministic finality (irreversible, full-settlement) is achieved in a short period of time, typically less than 1 second.

Due to Nano’s block-lattice ledger design, only account owners can sign blocks into their account chains, so all forks must be the result of poor programming or malicious intent (double-spend) by the account owner, which means that nodes can easily make policy decisions on how to handle forks without affecting legitimate transactions.”

PoS chains, on the other hand, use validators to secure their system, while community members stake their nodes, which bind to the network. According to Coinmarketcap, the top PoS networks are Cardano, Algorand, Tezos, Celo, and Mina.

What are the alternative strategies for proof-of-work?

Not every blockchain in existence uses the PoW consensus mechanism, others have other systems they use in validating transactions, building blocks, and securing the network.

Over time, PoS networks have been compared to PoW to show their strengths and weaknesses. Many of the blockchains are being created to solve the issues noticed in Bitcoin and Ethereum are based on the PoS network.

This is a consensus mechanism, where community members are incentivized to stake or bind their tokens to the network and get new tokens as their reward. Token holders or stakers tend to pool their tokens with the validators.

Validators, on the other hand, are chosen randomly based on some criteria. Before any node or validator is added to a PoS network, they have to invest several tokens to ensure they act in line with the rules.

This consensus mechanism is not as popular as their peer’s PoS and PoW. Before a miner can operate, some coins have to be burnt by sending them to an address, which makes them irretrievable.

Miners are expected to burn either the utility token of the platform or another coin.  Usually, miners that have burnt a larger number of tokens have a higher probability of being chosen.

Miners are chosen based on the hard drive space they offer to the network. The higher the drive space that a miner provides, the higher their chance of being chosen to one the next block. Those with high drive space tend to be chosen more often than those with lesser space. Usually, this consensus mechanism creates plots and stores them on the drives. Those that have a higher number of plots on their drives stand a better chance of being chosen. An example of a cryptocurrency that uses the Proof of Capacity feature is Burstcoin.

According to Coinmarketcap, this is a list of the top PoW cryptocurrencies based on their market capitalization, in a descending format.

In cryptocurrency how does proof of authority work?

In a Proof of Authority consensus mechanism, a set of participants are given the power to verify transactions and create blocks. It was built on the concept of Proof of Stake, though they are different. PoS consensus mechanism selects random and anonymous validators to verify transactions and build blocks. The real-life identity of the validators is anonymized, though their on-chain identity and history may be visible.

On the other hand, PoA networks vet the identities of their validators. Validators are chosen by a reputable centralized organization, like in the case of VeChain. Before anyone can be chosen as a validator in VeChain, they have to be vetted by the VeChain Foundation, thereby reducing the issues that may be linked to anonymous validators or block producers.

What are the pros and cons of proof-of-work?

Proof of Work has its strengths, which makes it stand apart from its companions, and its issues that its competitors are trying to solve in their novel platforms.

Though the high energy consumption deters spammers from trying to gain access to the network, it comes with its disadvantages. The energy needed is astronomical. According to the University of Cambridge Bitcoin Electricity Consumption Index, “about 80 terawatt-hours of electricity annually, roughly equal to the annual output of 23 coal-fired power plants, or close to what is consumed”.

What does PoW mean to BTC?

There are different types of consensus mechanisms in existence.

Introduction to Blockchain and What it Means to Big Data

A-Z of Proof of Stake (PoS) in Blockchain