Scaling Ethereum: An Introduction To Polygon 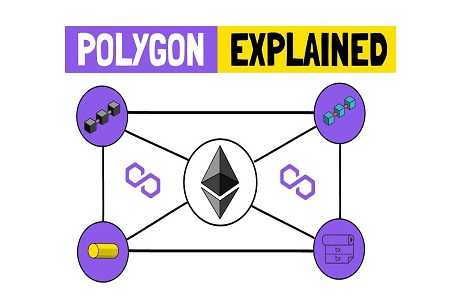 Polygon, a “Layer 2” solution for the Ethereum blockchain was recently rebranded from its original name, Matic Protocol. It is a protocol that can be used to build and link Ethereum-compatible blockchain networks. As an open-source platform, it offers developers the necessary tools to create a sidechain or a standalone network that benefits from Ethereum’s security.

How Does It Work?

Validators within the network perform checkpoints regularly on the Ethereum main chain. What this means is that a framework has been created to handle any transaction issue that may happen on the sidechain. Using Polygon allows people to easily move their tokens within the platform, without worrying about risks attached to third parties or even dealing with market liquidity restrictions.

Polygon relies to a large extent on the security that the Ethereum main chain offers. It also has its own level of security, while also incorporating scalability features which have been an issue in Ethereum. Polygon allows for cheaper and faster transaction processing, which is a positive development since Ethereum at the moment is a PoW protocol which makes it expensive as far as transaction fees are concerned.

Polygon, on the other hand, is a PoS platform. Apart from being a PoS protocol, Polygon utilizes Heimdall, which is an architecture that gained its popularity via Cosmos. Different from conventional PoW chains, where participants have to utilize a lot of energy to validate transactions, Heimdall does something else. It is an architectural protocol that chooses the PoS validators randomly, thus negating the need for energy-intensive competition between validators.

Polygon’s use of a dual-consensus mechanism is one of the best decisions that it made, as it incorporates decentralization into the mix, thereby improving scalability. Scalability has been a big issue for Ethereum, and Polygon is solving this issue. When internal tests were done in the network, it was found that the throughput was up to 7,000 transactions per second (TPS) on one sidechain. This is far higher than what is common in Ethernet mainnet, which oscillates around 14 TPS.

In 2017, Polygon was birthed and released as the Matic network. The team behind it was not new in the crypto world at the time of creating the ecosystem, as they had churned out projects linked to the Ethereum ecosystem. Initially, it implemented Plasma’s first version, which had been proposed by Ethereum co-founder, Vitalik Buterin.

In February 2021, Polygon decided to change its brand and take up the new name, Polygon.

From the month of March, different blockchain-based platforms had stated that they were incorporating Polygon into their action plan to ensure that their decentralized apps could easily scale and move past the restrictions that are common in the Ethereum mainnet.

A popular DeFi lending protocol, Aave, announced that it was launching on Polygon on April 24th, 2021, which sent the price of Polygon’s utility token, MATIC, flying through the roof, and shooting past its previous all-time high.

Polygon has grown tremendously in the blockchain world, and its popularity has been linked to the solutions that it is bringing to the Ethereum space. Its sidechain architecture offers quick and affordable transactions, which are unseen in the Ethereum mainnet.

During its rebranding, Polygon put in strategies to make it globally recognized. For instance, it incorporated the Matic Plasma Chain and attracted innovative metaverse projects.

In the storm of the Ethereum chain’s congestion and high fees, Polygon swooped in with low fees, and this attracted projects. Polygon will continue to add more projects to its ecosystem because there has been a growing need for scalability networks.

Why Is Polygon Different?

Polygon stands out from its competitors by offering developers innovative tools that can be used in creating highly scalable dApps.

Its peculiarity is linked to the fact that it is the sole scaling information that can support the Ethereum Virtual Machine (EVM) while permitting those chains connected to it to still retain their sovereignty. It also allows them to easily interact with one another and even the Ethereum main chain. Interoperability is a big feature in Polygon.

Polygon is different from other platforms, as it doesn’t force dApps to use its security infrastructure as a service layer. These dApps can still interact and send messages to one another.

Polkadot: What You Need To Know

What To Expect In Ethereum 2.0